Both my Spoonflower dress and my bias challenge dress are sleeveless, so an extra layer to extend them into 3-season wear is nice to have. I filled this wish list item with a black rayon knit cardi that follows the curve of the Empire seam on the dress. 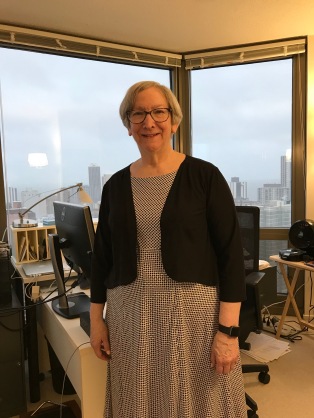 For the pattern, I used my no-closure topper. I thought I would use the pattern I had made for the white piqué jacket as a guide for the hemline, but I quickly learned that translating the princess seams pieces to a pattern that gets its shaping from pleats and darts is not a straightforward process. Then again, it wasn’t rocket science either. A little draping on my dress form got the job done.

As I said, the pattern uses pleats at the shoulders, along with darts for shaping.  It also has pleats at center back where I rotated out the princess seams. So, getting pleats into the knit was my first construction challenge.

It occurred to me that I could hold the shoulder pleats in place and stabilize the shoulder seam in one fell swoop if I used fusible stay tape. (What did we do before all these fabulous fusible products came on the market?) My favorite brand is Design Plus. I used the straight version for the shoulder seams, then sewed the seams together. This had the added benefit of stabilizing the shoulder seams, which I probably should do all the time in knits but don’t. For the pleats in the center back at the neck, I used the bias version of the same product. 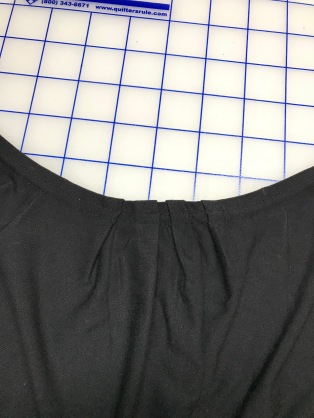 I used this project as an opportunity to get comfortable with the cover hem function of my new-to-me Babylock Evolution. I practiced on multiple samples, following tips from Gail Yellen’s Craftsy Class and Pamela Leggett’s Threads video and book.

I snipped the seam allowance at the point where the hem would turn under so I could have the hem allowance seam allowance face the opposite way from the garment seam allowance, thus reducing the number of layers the machine had to deal with when it crossed a seam. It also made the finished product look and feel nice and flat.

To stabilize the hem, I used Ultra Soft fusible web at the cut edge, first pressing what Gail Yellen calls a “memory crease” with the backing paper still on. The curves required lots of snips, pins and patience as I worked my way around the entire periphery of the garment. 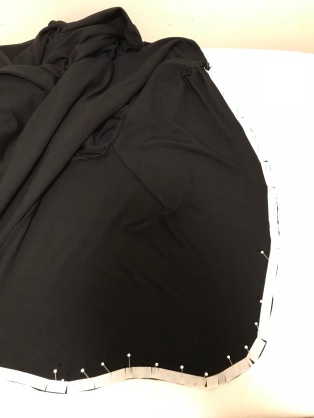 The next steps were to remove the paper backing, pin where needed and press to glue the layers together. This ensured that I wouldn’t get any fabric creeping and bunching or twisting as I sewed the cover hem.

I’m glad I prepped multiple samples for the coverstitching because I found that things went great on the first sample and the left needle came unthreaded on the second. After rethreading the machine a few times and having the same issue, I found a more detailed threading diagram in the machine manual and discovered that I was missing one piece of the needle thread path. Problem solved.

Except that wasn’t my only problem. I made what all the serger teachers say is the most common mistake made on serger/coverstitch machines multiple times, which is stitching when the presser foot is in the up position. I kept forgetting that lifting up the presser foot to its highest position so I could position the fabric under the needles and then letting go still leaves it in the up position. The lever has to be lowered to get the foot all the way down. I got to the point where I said out loud “remember to put the presser foot all the way down” whenever I had to start a new line of stitching.   My cat didn’t get annoyed and I got the job done on the entire body of the garment as well as the two sleeve hems.

So, now I’m not intimidated by the coverstitch function of my serger, plus I have a nice new layering piece to wear.

I was in college when Diane von Furstenberg’s wrap dress found its way into almost every woman’s closet, but when I tried it on the store I didn’t think it was for me. So, when Jenny Rushmore introduced her line of sewing patterns for curvy women, Cashmerette Patterns, with a curvy-friendly version of the wrap dress called Appleton, I bought a copy of the pattern but wasn’t sure I’d ever make one for myself. Then I saw how fabulous it looks on my lovely friend Stephanie King of Siouxzeegirl Designs and she let me try hers on. It looked really nice, so I decided to give it a try.

It may seem odd, but the biggest mental barrier I had to overcome besides my skepticism about how the dress would look on me was my past difficulties with starting from someone else’s pattern. I knew this is a very well-drafted pattern, but my experience has been that when I start with someone else’s pattern I have to make a ton of adjustments to get it to fit me. And I did have to grade across sizes to get the hips to fit without falling off my shoulders. I actually made two mock-ups and almost ended up making a third, which seems absurd for a knit dress, but I couldn’t help myself.

My job was made easier by the fact that my dress form is now padded to resemble my figure pretty closely. This was another thing I had resisted doing because i didn’t think I wanted to live with a reminder of the shape my body is in now. But, I agreed to participate in a pilot class on draping that Sarah Veblen was developing and so I made a basic dress sloper out of heavy weight muslin from my bodice and skirt master patterns for a workshop several months ago. Sarah draped out pretty the wearing ease until it was quite form-fitting. I installed a heavy-duty separating zipper down the back and had my new dress form cover. I then proceeded to stuff the space between the muslin and my dress form with foam pads from Fabulous Fit and batting. I got really frustrated in the draping class and convinced myself that I’m no good at draping and this entire exercise was a giant waste of time that would have been better spent sewing. Then when I was working on this project, after trying on the first mock-up, I put it on the dress form and the next thing I knew I was draping adjustments.

For the mock-ups, I used cotton interlock knit from Joann’s (with a coupon, of course). The first mock-up gapped at the bust and clung in all the wrong places, so those pictures will not be posted anywhere. 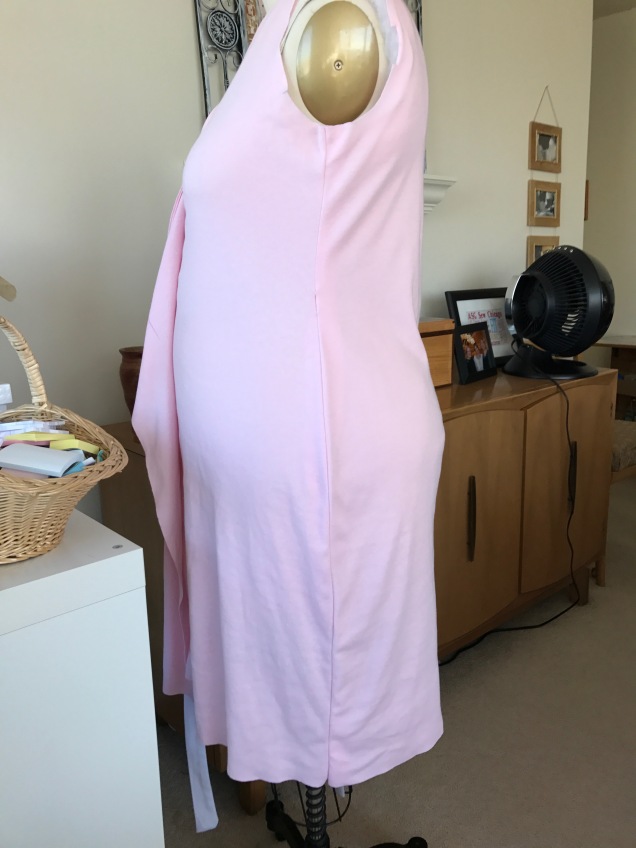 That was all well and good, but I made a mistake that is typical for me, which is to add too much to the hips and taper below that and end up with what I refer to as the jodhpur effect. One of the suggestions Sarah Veblen made in a mentoring session was to have the skirt flare out a bit instead of dropping straight from the hip. That adjustment really helped. 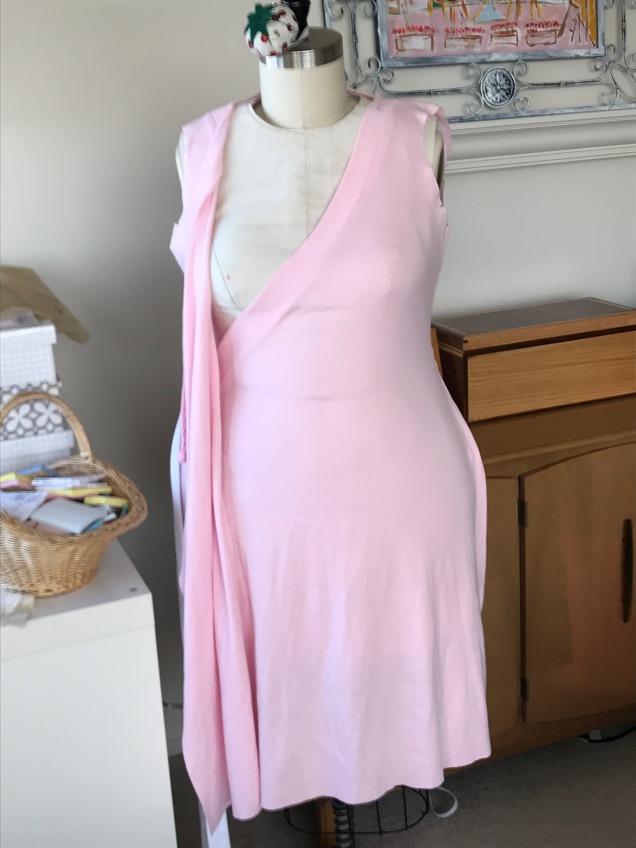 As you can see, there is no center front marking and no horizontal balance lines. The pattern does not have center front marked, which makes sense because it’s different on different types of figures. I had marked horizontal balance lines on my first mock-up but Sarah told me that wasn’t necessary in this dress, which she had fitted on other students. Still, when I was working to adjust the first muslin it helped to work with the front and back independently so I could get them to be as level as possible.

Another thing that I did early on was lower the waist so that the ties went around my waist. The pattern is drafted so that the wrap is higher than the natural waist, almost Empire height. The problem with lowering the waist was that it created gaposis at the bust. So, I put the waist back where it wanted to go.

Sarah suggested that I might want to add shaping darts to the back. Darts were my nemesis during the draping class, but I could see how the fabric really “wanted” to have them added. 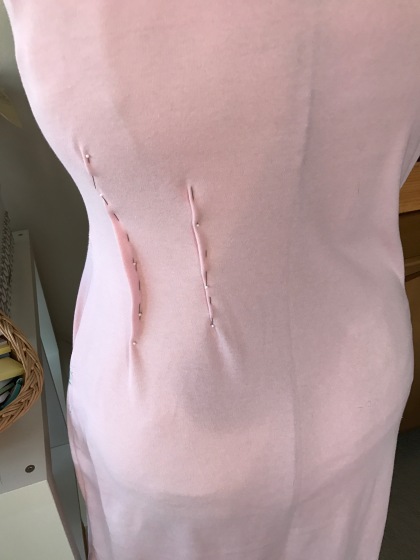 As you can see, I pinned the darts to the outside, which is not what I was supposed to do. It got the job done here, but I’m trying to learn to make my fingers manipulate the fabric so that the dart intake is toward the dress form. I’ll get there. Eventually.

I wanted to make this dress in an ITY knit, but the ones in my collection were in quantities suitable for knit tops, not a dress. I had trouble finding ITYs (only because I was looking for them!) and then I found this lovely rayon-Lycra knit from Stone Mountain & Daughter. I was hesitant, thinking that Rayon is too drapey and possibly clingy for a dress on me, but this fabric has a lovely dry hand and worked beautifully.

Next came the challenge of hemming. Again, I’m really spoiled by working with master patterns developed with Sarah Veblen because when the horizontal balance lines are parallel to the floor, so is the cut edge of the fabric at the bottom. Hemming is a straightforward process of turning up the fabric an even amount all the way around and stitching. Not so on a pattern that is not customized to a particular body.

I could have asked a sewing friend to pin the hem for me, or even paid my dry cleaner to do it, but I wanted to get this project finished and move on to what’s next. My first attempt was to use the contraption that stands on the floor and you squeeze a bulb so chalk dust spits out on your dress as you turn in place. That didn’t work at all. So, I resorted to the technique I’ve used for fitting myself or having Sarah analyze my fit issues long distance – setting up the tripod and camera and using a 10-second delay to take a series of pictures. 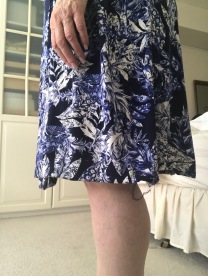 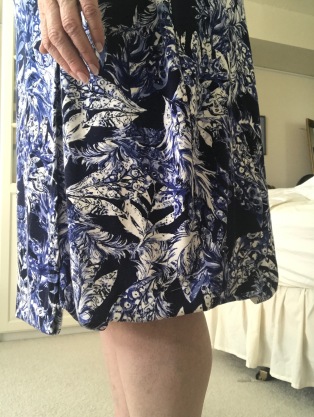 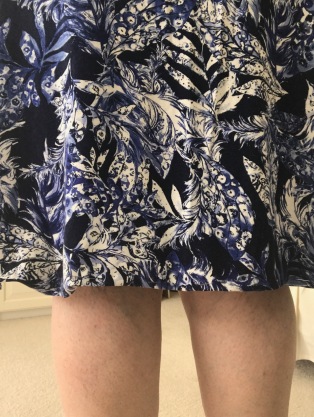 First I pinned where I thought the hem should be, then I looked at the pictures and saw where it was uneven. I made adjustments to the pinning and took more pictures. After two rounds of this, I got it to where I was satisfied.

For the actual pinning, I found it was much easier to mark a few reference points with pins on the dress form and then work on a flat surface. When I got it to where it looked straight to me, I trimmed where the hem allowance was deepest, pressed and stitched. I adjusted the pattern, but where the hem ends up on any individual dress will probably vary with the type of knit I’m using.

As you might be able to tell from this picture, I’m still shying away from having the ties go across my tummy. So, my solution is to tie them at the side so that they only go across the back. The other thing I debated was whether to add a hidden snap in the front to prevent unscheduled appearances of lingerie. I was worried that it might pull, but I tested it out with a small safety pin and discovered it’s not noticeable. So, I’m adding a small nylon snap for security.

The dress is incredibly comfortable to wear and, now that I’ve done the pattern work, will be pretty quick to sew again.