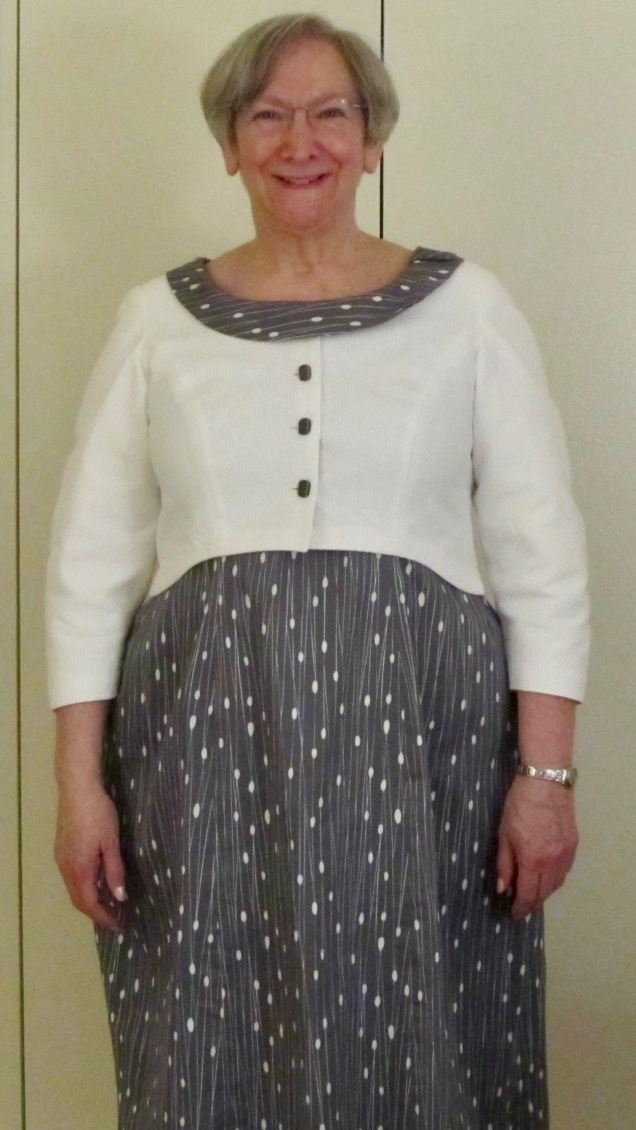 In a mentoring session with Sarah Veblen last month, we talked about a planned business trip to Brazil. I know the weather will be quite warm, but I need to look polished every day that I’m there. I simply don’t have enough warm weather clothes that fit the bill. One of the suggestions Sarah made was to make a white cotton jacket to wear over the dress I had made for the Spoonflower fabric challenge last summer.  It just so happened that I had two different white piqués in my collection as well as some gray buttons with a white stripe that blend well with the print of the dress. 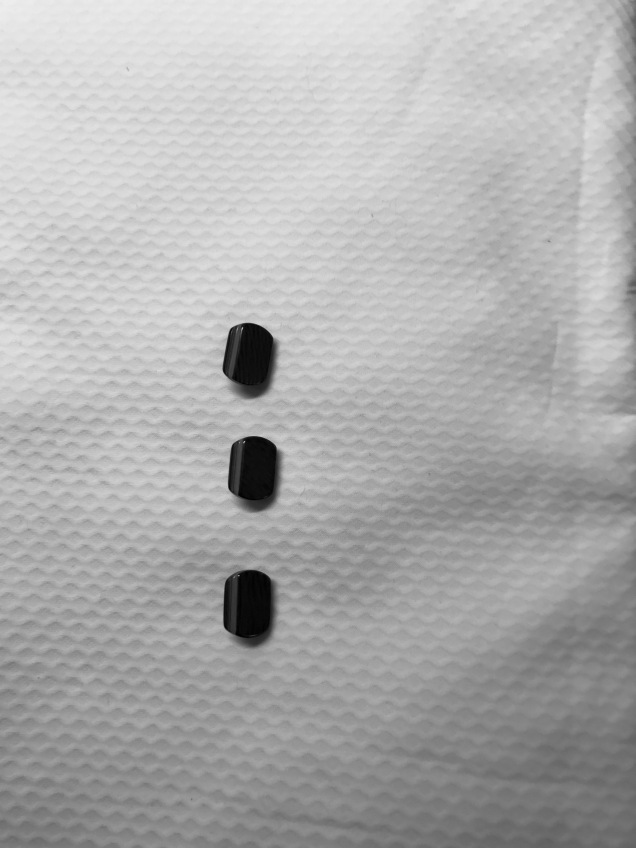 All I  needed was some white Ambiance lining and I’d could get started, or so I thought.

The plan was to use the bodice pattern pieces for the Spoonflower dress to make the body of the jacket, with an adjustment at the shoulder to make room for a pair of very thin shoulder pads called “Angel Wings.” The sleeves could be made from either my master jacket pattern or my master blouse pattern, whichever worked. Both are two-piece sleeves. However, I discovered that I no longer had all the pattern pieces for the Spoonflower dress. I started the dress to enter in the October 2015 ASG Chicago Chapter fashion show, but when I couldn’t finish it in time it remained unfinished until last summer. In the interim, I used the pattern as the starting point for my Little Black Dress that I wore in last spring’s Haute Couture Club of Chicago fashion show and to a wedding last June. I didn’t expect to like the Spoonflower dress as much as I do and so I didn’t think I’d want to make another dress from the pattern. So, instead of copying all the pattern pieces to make the modifications for the LBD, I made the changes on the existing pattern pieces. I’ve since decided that I do want to make new versions of the original dress again and I really regretted not taking the few extra minutes to copy all the pattern pieces when we were developing the LBD. That’s a mistake I won’t make again.

So, my first task was to reconstruct the original Spoonflower dress pattern, then copy the bodice pattern pieces adding an extra inch beyond the modified Empire seam of the dress. Because that seam is so curved, I needed to make a faced hem, which required new pattern pieces and interfacing.

I kept everything else very simple. The neckline is the same as the neckline of the dress so that it sits under the dress collar and the top button is hidden. I lined it to the edge and just made interfacing pattern pieces to interface the lining where facings might otherwise have gone, including at center front to support the buttons and buttonholes.

Of the two cuts of piqué that I had in my collection, the traditional birdseye weaves is a bright white and the less traditional one is a softer white. That’s the one that goes better with the dress. In looking at the weave, which looks like a honeycomb, I decided I wanted the elongated pattern to go in a vertical direction in the garment, even though that is the cross-grain.

I also decided that the fabric needed to be cut in a single layer to achieve some degree of consistency at the hemline of the adjacent pieces. That meant making a full pattern for the back piece and remembering to cut mirror images of the front, side and sleeve pieces. I ended up labeling each piece “left front”, “right front”, etc. I didn’t want to leave any room for error.

After doing the pattern work and cutting, I wanted to get sewing, so I put off cutting the lining . This turned out to be helpful, because when the jacket was constructed and I needed to attach the shoulder pads, I went ahead and did all the hand sewing that had to be done on the fashion fabric. That cut down on the amount of hand sewing I had to do at the end and made it less daunting.

After trying on the jacket and determining button placement, it was time to test the  buttonholes. The buttonholes themselves were fine, but I was having trouble getting them placed exactly where they needed to be. With white fabric I didn’t want to take a chance on using a Frixion pen or even a chalk pencil and pin marking was hard to see. So I decided to try cutting painter’s tape to a width that matched the space from the finished edge of the jacket to exactly where I need to sink the needle at the start of the buttonhole. 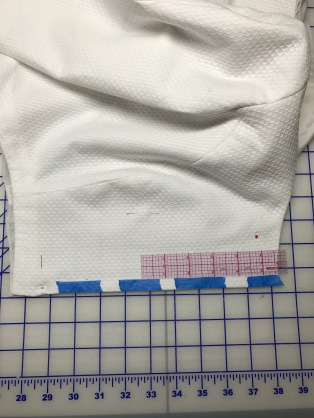 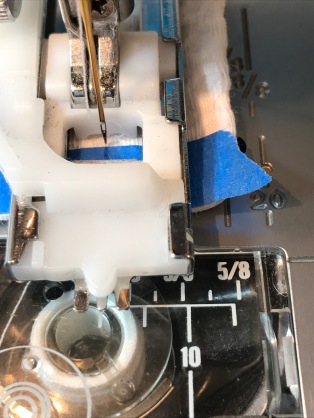 I marked the horizontal lines in pen and attached the tape to the sample I was working with. I found I could sink the needle in so that it just brushed the edge of the tape and lined up exactly with the pen marking. I’m definitely going to use this technique again.

The other breakthrough in this project was that the lining jump hems didn’t trip me up. I serge finished and pressed under the cut edges, attached them to the serge finished edges of the fashion fabric hems (for the sleeves) and hem facings (for the body), hand stitched them in place and lightly steamed the lining. Done! 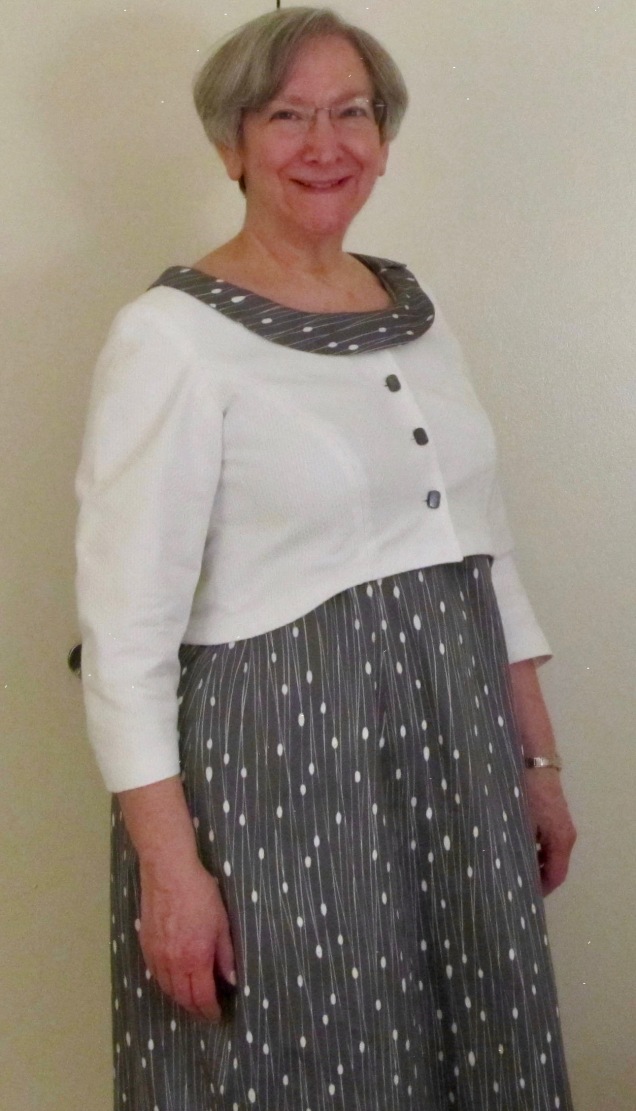