I adore the Australian TV series Miss Fisher Murder Mysteries. Set in the 1920s, the series has much to offer in the way of engaging characters you can’t help caring about, but the bonus is that the costumes are absolutely fabulous. I’m talking rivaling Downton Abbey fabulous, and that’s saying something. The show had a three-season run that can be streamed here in the US on Netflix and sometimes found on PBS. After watching an episode all the way through, I would often rerun it so I could stop and sketch costumes that inspired me. In one episode, Miss Phryne Fisher appeared in a pair of black wide-legged trousers and a black top that had a mesh inset at the top and sleeves made of the same mesh. I had to have one of my own.

The pattern I used as a starting point is my knit version of my basic fitting bodice, which has armscye princess seams. I know, fussy for a knit but the shaping is worth it. Besides, I managed to make this project quite a bit fussier.

The pattern work was pretty straightforward. Buy a strapless bra. Try on a muslin from another garment and trace where the bra ended. I drew a line  across the front pattern piece that was above that point and made two new pattern pieces with seam allowances.

Miss Fisher’s version of the top has a jewel neck, which I tend to avoid. Still, I think I could have gone a bit higher on the neckline for this.

The black knit has been residing in my fiber archive collection for some time. The mesh inset is a Pointe d’Esprit that sang out to me on Marcy Tilton’s web site. She has an entire section on her web store devoted to mesh, lace and net.

I had never worked with mesh before and so I did some reading and tested some seaming options on scraps. I decided to baste the mesh on the sewing machine and then finish the seams with a narrow hem on the serger. It gave me the effect I was after.

Of course I needed to sew down the seam allowance on the seam separating the mesh from the knit so that it would stay hidden, but when I tested topstitching I didn’t like the way it looked. That’s where this project started getting more involved than I had planned. 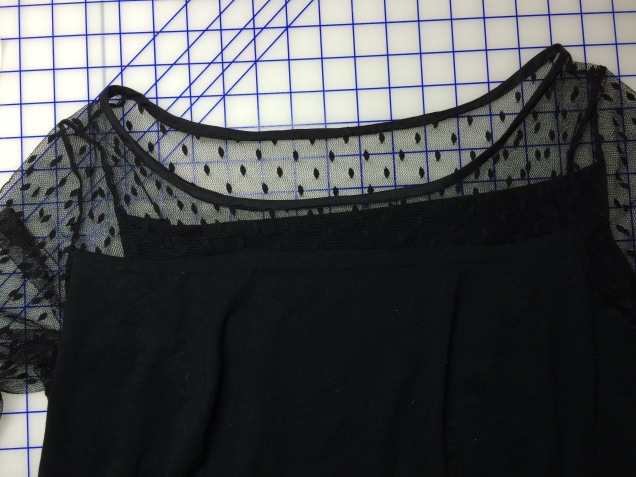 I remembered from an online class taught by Susan Khaljie that in couture, the generous 1-inch seam allowances are attached to underlinings with catch stitches. I didn’t have underlining to work with, but I wasn’t using a tissue knit so I figured I could just catch a thread or two in the body of the garment in each catch stitch and it wouldn’t show on the the outside. The results were nice and smoooth. That’s when I got carried away and decided to use the same treatment for the princess seams and the hem. 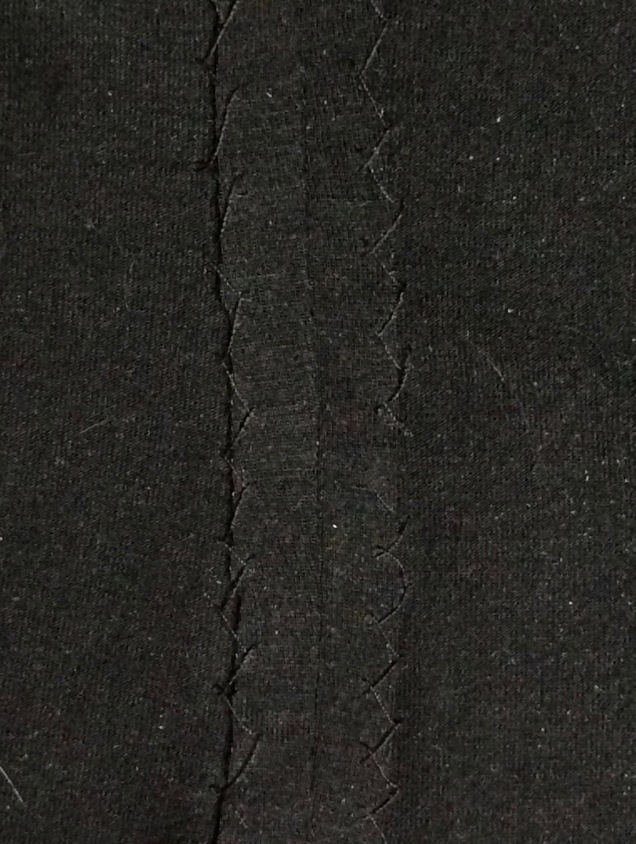 Yes, that’s the point at which I asked myself if I was completely crazy to do this much work for a knit top, but it’s not just any ordinary knit top.

I considered binding the neck edge and sleeves with a strip of the knit fabric, but I decided that would be too heavy. Instead, I opted for a bias binding of China silk. Of course, that was attached on one side by machine, then wrapped around the edge, pinned and sewn to the inside by hand.

So, it’s definitely a fussy project but I enjoyed the process of experimentation and discovery and I really enjoy wearing the finished product. So far I’ve worn it with black slacks, but I’m contemplating a black trumpet skirt (the current term is fit and flare) in a drapy rayon crepe that I think will look great with it too.