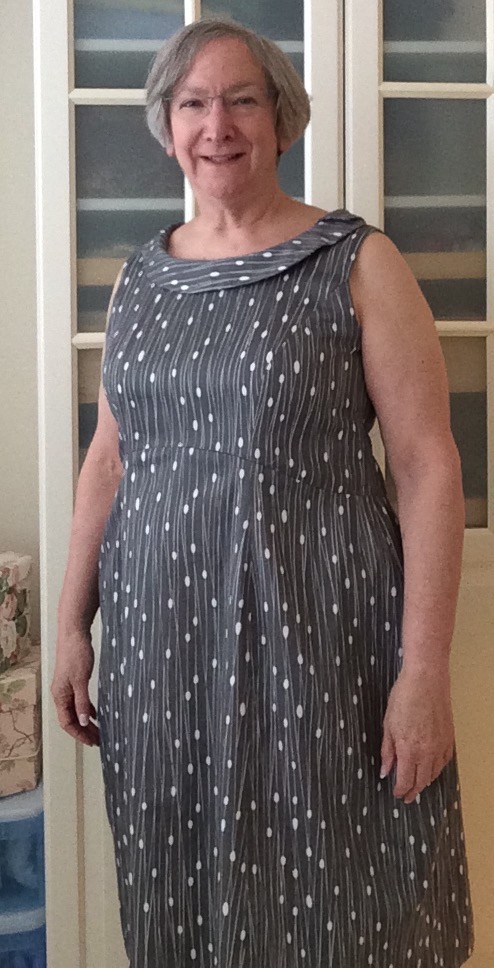 The latest addition to my self-designed wardrobe is a dress made from organic cotton sateen in the print called Entangled, which was designed by Heather Dutton of Hang Tight Studio and sold on Spoonflower.com. I intended to wear it in the ASG Chicago Chapter fashion show last October as part of a group challenge with other members of my neighborhood group, Sew Chicago. We had voted on the print and we could choose to make any garment using any of the fabrications and colors that were offered in this particular print. I really like the print and  I wanted to be part of the group on the runway, but I was the co-coordinator of that show and the dress didn’t get finished in time.

I tried it on for Sarah Veblen later that fall and she pinned out some of the fullness in the side seams and contoured them toward the hem. Nice improvement, but when I realized that making that change meant resetting the invisible zipper on one of the seams, it remained unfinished for months. I rationalized that this is a summer dress and there was no point in finishing it in the fall or winter. Then came the crunch for the Haute Couture Club of Chicago fashion show and the next thing I knew there was just barely enough time to get it done so I could wear it at the ASG National Conference in Indianapolis.

As you can see, the dress has a curved Empire seam. It dips quite a bit in the back. 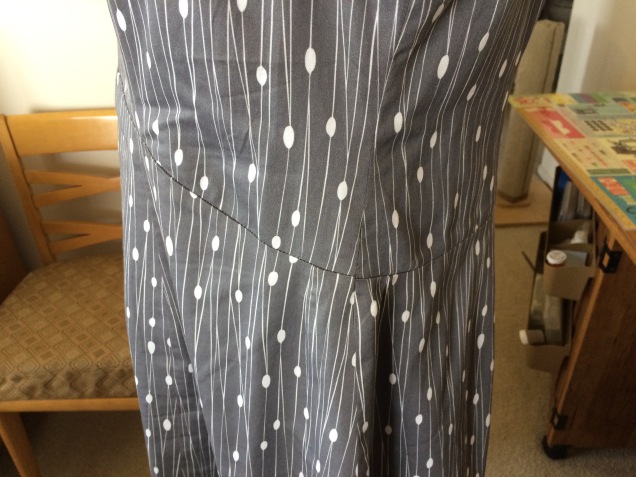 When I used this design again for my Little Black Dress, which is more fitted in the skirt, I modified the curve so that it didn’t dip as much.

I was really excited about the way this print worked on the collar. I had seen a striped cotton dress on a mannequin in a store last summer that had a collar like this one. The stripes were vertical in the body of the dress and horizontal across the front of the collar. I knew this print would give a similar effect and that it would be a piece of cake to draft the pattern.

It’s basically a Peter Pan Collar without a break in the back with the front edges extended to overlap a bit and shifted over to the side to go over one shoulder. 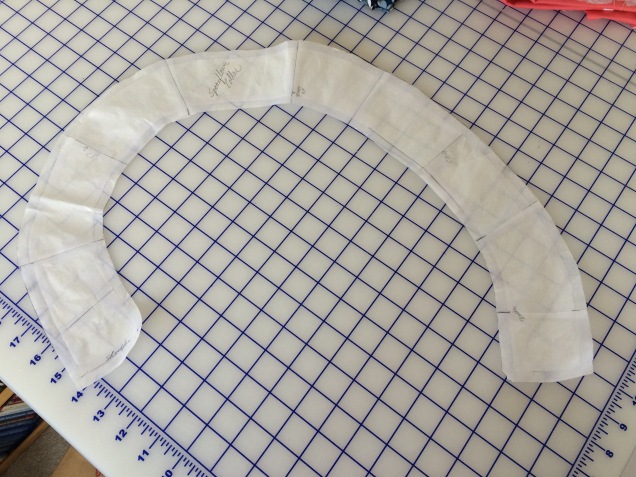 I used small release pleats and tiny darts to control the fullness from the relaxed silhouette I was going for.

I lined the dress in light blue Imperial cotton batiste. The overall effect is a dress that’s amazingly comfortable to wear.