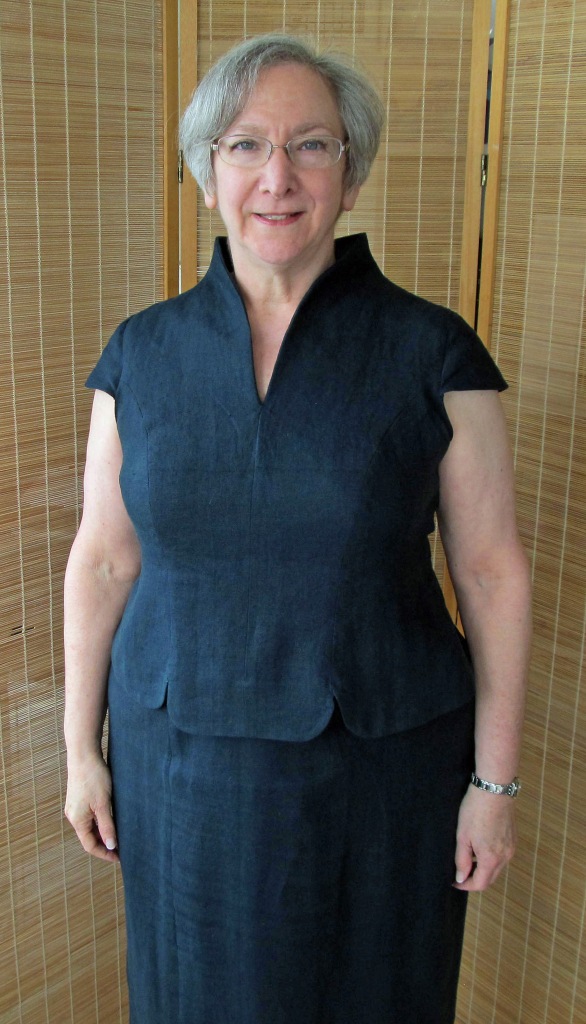 This dress has a neckline I’ve been wanting to incorporate into a garment for a long time. I first encountered something similar in a knit top from Talbot’s and later in a jacket from Chico’s. I set out on a mission to find a pattern for it, but I never thought they got it quite right. The knit versions collapsed and the patterns for the woven versions stood up a bit but leaned into the neck. Then I saw a picture of a jacket made from a Burda pattern that looked right. I tracked down the pattern on a vintage pattern web site, bought the only size they had and discovered the secret to achieving the effect I was after: darts.

Shaped darts in the back of the neck, to be precise. One on either side of the center back seam.

The pattern drafting was pretty straightforward.  I decided how high I wanted the neck to go up and extended center back to that point. I curved the line out a bit, which meant using a center back seam instead of cutting the back on the fold. A center back seam also has the advantage of adding structure, which helps prevent the neckline from collapsing.

From the shoulder, I drew a curve to the height I was going for, then connected those two points and added the dart. The picture below compares the final back pattern piece to my jacket block pattern piece. The back seam is at the left in this picture.

For the front, I wanted the neckline to open out into a shape reminiscent of a tulip. Starting from a copy of my sloper bodice front piece, I marked the same height that I used for the back and drew a shoulder seam that curved from the shoulder point to that highest point. I played with curves from center front to the highest point until I was happy with the shape. Here is a comparison between the final front pattern piece and the front of my jacket block. 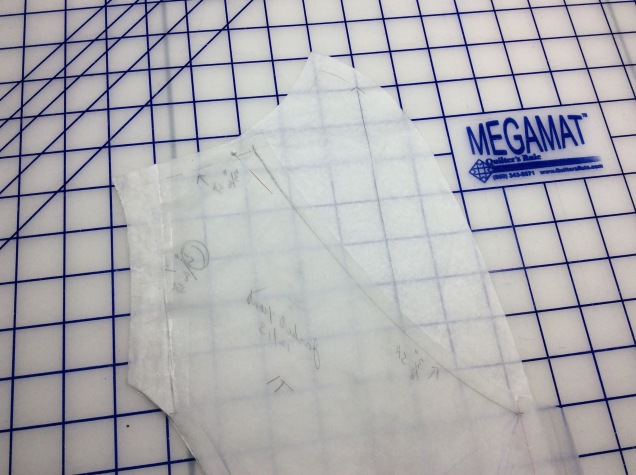 The next step was to test it out. I made a mock-up of the upper part of the front and back pattern piece, sewed in the darts and tried it on. I brought it with me on a trip to work with Sarah Veblen and she made some adjustments. 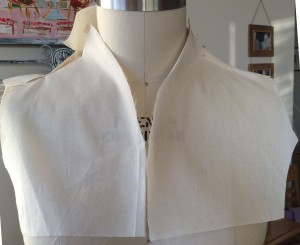 During that same session, Sarah draped a cap sleeve on me that I used in a blouse and this dress.

The next idea I had to complete the tulip theme of this dress was to incorporate a shaped faced hem like the one in McCall’s pattern 2818.

(Do I have two copies of this pattern? Oh no. I have three. Tracking my patterns in an app is the subject of a future blog post.)

To achieve this, I drew a curve at the bottom of each princess seam with the help of one of those pocket curve templates. I also marked the point where the stitching needed to stop when joining the seams and I drew a line to mark the top of the hem facing pattern piece I needed to make. The curved line drawn toward the top of the pattern piece is the bottom edge of the back facing piece.

With the pattern work done, I was all set to make the dress. The problem was that I wanted to use the inky navy linen from MarcyTilton.com that I had been saving for just the right summer business meeting-appropriate dress and there wasn’t enough of summer 2014 left for me to get it done. So, I packed the partially-constructed dress away and worked on it in spring 2015. Constructing this dress was an adventure in itself that we’ll cover in the next blog post.

8 thoughts on “Designing the Tulip Dress”