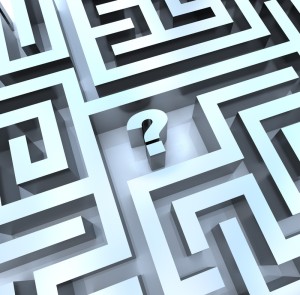 At first, it sounded straightforward. Not difficult at all. All I had to do was measure my body at prescribed points, compare those measurements to a pattern for a basic sloper, do the math and adjust the pattern to reflect my own measurements. Simple, right? Hardly.

The first problem, of course, is where to measure. Where is the shoulder point, anyway? Is that exactly at the waist? Should the hip measurement be here, or a little lower? Is the tape measure straight?

Moving on to circumferences was when things got really dicey. Teachers and books instruct us to slash the pattern open and spread it to fit, then fill in the gap with paper. The problem with doing that when you are shaped like a pear is that the side seams become so distorted that the original shape of the design is lost. So I tried to create a curve that allowed the side seams to follow their original direction using the seam-only method and ended up with ugly “wings” or flaps of fabric.

What about making the transition at the armscye? Tried that, which meant spending hours trying to make corresponding changes in the sleeve. Just about every time I corrected a problem with a pattern adjustment, two or three other problems seemed to crop up. I was going in circles.

To make matters worse, this process brought all my body issues front and center. Comparing my measurements to the “ideal” I saw in the patterns made me berate myself for every pound I had gained since I was in my twenties. I even had an instructor point to me in a workshop as an example of an “irregular figure”.

At one point I thought draping might be the answer and I made a dress form that was supposed to be an exact duplicate of my body. It turned out that the dress form and I were not really twins. I still don’t know what went wrong there. What about tissue fitting, you might ask. Tried that, too.

There were many times that I asked myself why I was spending so much time and money on something that was making me so miserable, but I was too stubborn to admit defeat. So, I persevered and joked that I was an artist who worked exclusively in muslin. The only garments I finished were knits and the occasional loose-fitting woven. I even managed to make some pleated trousers that looked pretty good until you got up close and saw that the side seams weren’t straight. I was sure there was an answer out there. I just had to find it.

Yes, there is a happy ending to this story. In 2009, I signed up for a class on PatternReview.com called “All About Set-In Sleeves and Armholes” taught by Sarah Veblen. Once I started reading Sarah’s class materials, I knew I had found a teacher I wanted to work with. I went to her web site, read about her workshops, learned that she is an expert in fit and decided I had to not only take more of her classes but share her with my ASG group.

The first time we talked on the phone I learned that Sarah was working on her book, The Complete Photo Guide to Perfect Fitting. Using the words “complete” and “perfect” means this book makes some pretty big promises, but Sarah delivers on those promises.

The foundation of Sarah’s method is draping. She has her students make up a muslin with regular seam allowances. Like other teachers, Sarah will “read the wrinkles” in the muslin, but where she differs is that she also uses a grid to help identify areas that require changes and to indicate when the problems have been resolved. The grid is formed by marking the center front and center back as well as one or more perpendicular lines called horizontal balance lines, or HBLs.

After Sarah pins the changes, she has you transfer the markings back to the paper pattern, following the rules of flat patternmaking so that the pattern is accurate and reusable. There is a learning curve, which she patiently guides you through.

Not only does working with Sarah give me the result I had been striving to achieve, but Sarah’s approach frees me from comparing the contours of my body with the dimensions of a pattern. Once I’ve made all the changes, I make a fresh pattern and that becomes the standard, not some set of measurements that represent an average of some unknown number of women who look nothing like me.

In the next post, I’ll tell you about my first workshop with Sarah and how working with her has transformed me from the disappointed would-be garment sewist stuck working exclusively in muslin to the happy camper who is cranking out garments that flatter my curves.

One thought on “Fit Odyssey”